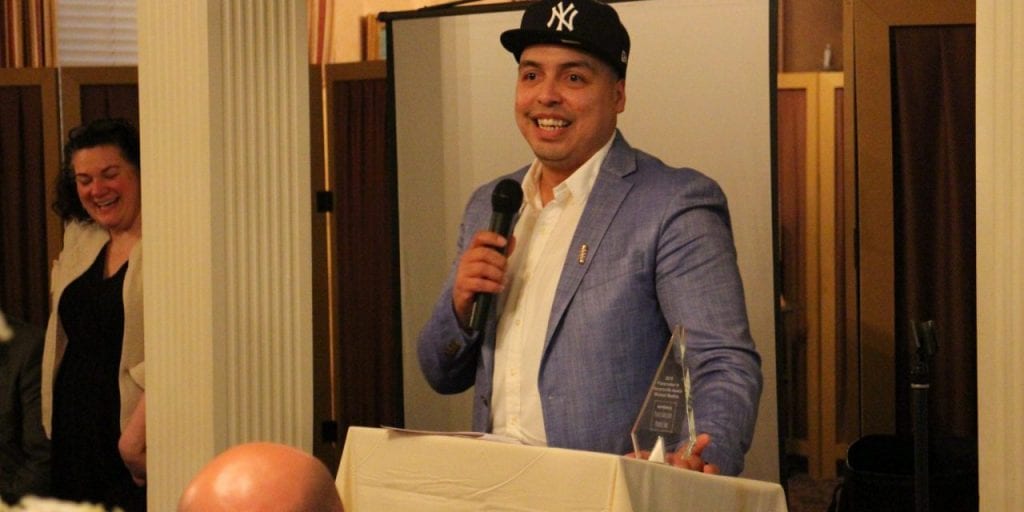 GLOVERSVILLE — A community is forming around the idea of revitalizing the city, and it’s made up of people who care about the future of the place.

In conjunction with 100in1 Day, a placemaking dinner was held on May 2 at the Eccentric Club. 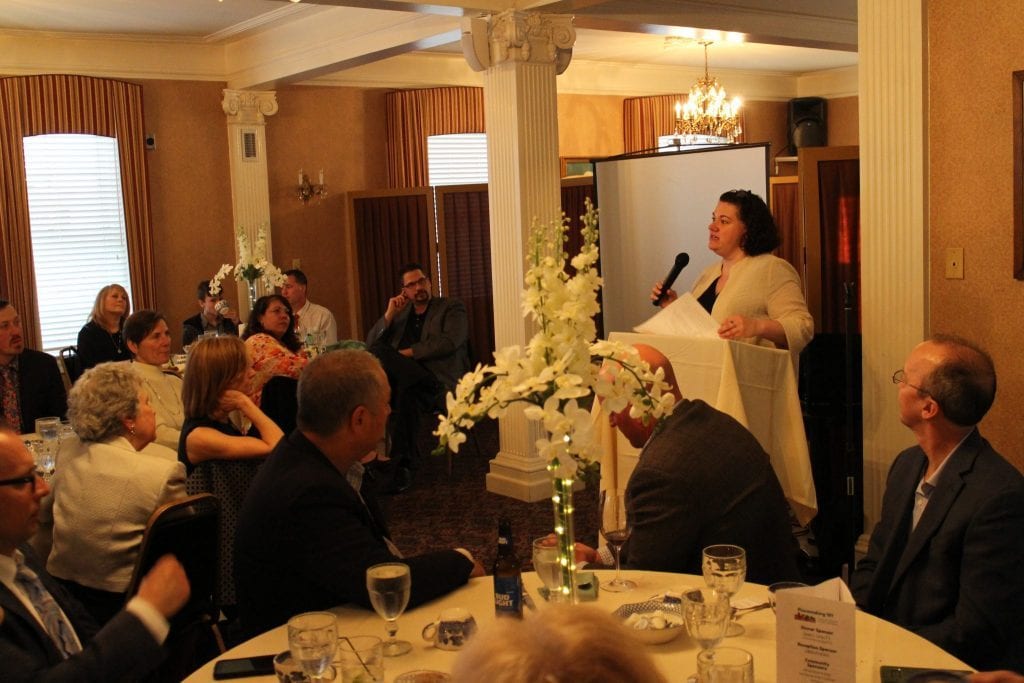 Downtown Development Specialist Jennifer Jennings opened the event by welcoming guests and noting that “community is the cornerstone of revitalization efforts.”

“We began this dinner last year as part of the Placemaking 101 Conference and that event helped spark a lot of discussion, action, and faith in the process of revitalization downtown,” Jennings said. “We’re going to take things a little farther — tonight is the launch of a placemaking weekend and Saturday we will be the host of 101in1 Day Gloversville. We are the first city in the nation to hold this event. It is a day full of small actions that creates critical mass for positive energy.”

The highlight of the evening was the presentation of the Placemaker Award to Medina. Jennings introduced Medina, saying that his barber shop has become a welcome community fixture.

“He makes downtown a home,” Jennings said. “… Placemaking is a form of economic and community development that’s very bottom up. We work with people to reconnect to their built environment, but also to be involved in the community. It can be as big as a municipal project like a park rehab or as small as one person making their corner of the city a better place.”

Jennings added that she hopes to present the award annually to “someone who helps make downtown a better place.”

As Jennings became emotional and introduced Medina, attendees erupted in a standing ovation. 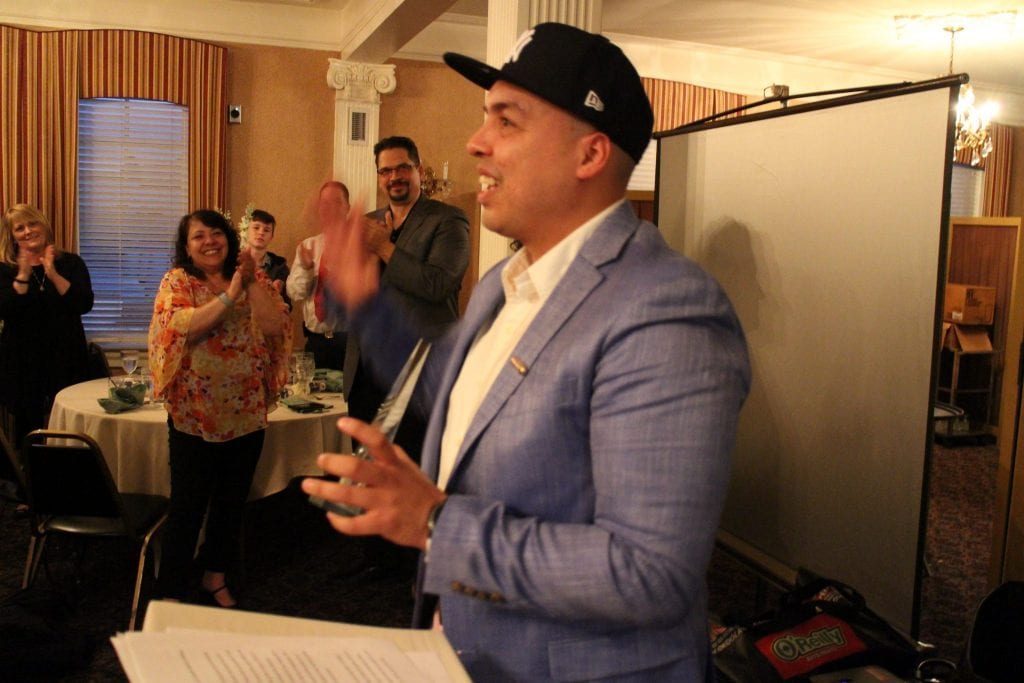 Before getting into his speech, Medina asked the barbers he works with to stand so he could thank them because “we would not get this award without you guys.”

Medina noted that it “wasn’t always easy” and there were times when they are looking at each other asking “where are the people?”

“What I’m trying to do in the shop is just create a very welcoming environment,” Medina said. “I want anyone that comes in there, no matter what age, where you’re from, it doesn’t matter, you can relate to something we have going on in the shop. We try to make it as comfortable and welcoming as possible.”

That mentality has translated into success for Medina and his crew, realized by the announcement that he recently purchased the building that houses his barbershop that he had been leasing for eight years.

“We’ve built something, we’ve created something in Gloversville,” Medina said. “We have a huge responsibility to Gloversville now and we’re ready, willing and able to take on this responsibility. … My plan is not to stop at the barbershop, it is to collaborate like you said and also just we need to build. I have a lot of work ahead of me, but I’m willing to do it. I know I can do it. As long as I’ve got the people like you guys in my corner, I know we can do it.”

Medina partly attributed his success to something he witnessed Mayor Vincent DeSantis do one day. Before becoming mayor, Medina watched DeSantis pick up litter on the sidewalk while walking downtown.

“It blew my mind — you didn’t know that — but you changed that part of me,” Medina said. “That may seem like something so little, but it’s huge. … If we all started doing that then we would see a whole totally different Gloversville — one person’s action really matters a lot.”

Prior to the award presentation, keynote speaker Fabrizi discussed the successful revitalization of Corning’s Gaffer District.

Corning Intown District Management Association Executive Director Coleen Fabrizi speaks during Placemaking in Gloversville: A Celebration Dinner on May 2 at the Eccentric Club. Dusten Rader/Express Editor
“When I drove downtown today, I fell in love with your architecture — this is a gem — save it,” Fabrizi said.

Fabrizi described how “horrific” hurricane Agnes nearly destroyed Corning’s Gaffer District and how public and private partnership is what “brought it back from the fringe of disaster.”

Fabrizi pointed out that revitalization is complicated, but it is also simple. She said the organization she works for decided that in order for Corning to be a place where “people want to live, work, and play,” they need to be given a reason. That’s why the group stopped talking about its vacancy rate and began to call it “occupancy rate.” It also started the #lookup campaign, which focused on highlighting visual treasures of downtown such as architecture and business owners.

“Placemaking is powerful,” Fabrizi said. “Continue to make this the place that people want to be. Be proud of it. There are many more reasons to look forward and work together and collaborate than there are to not.” 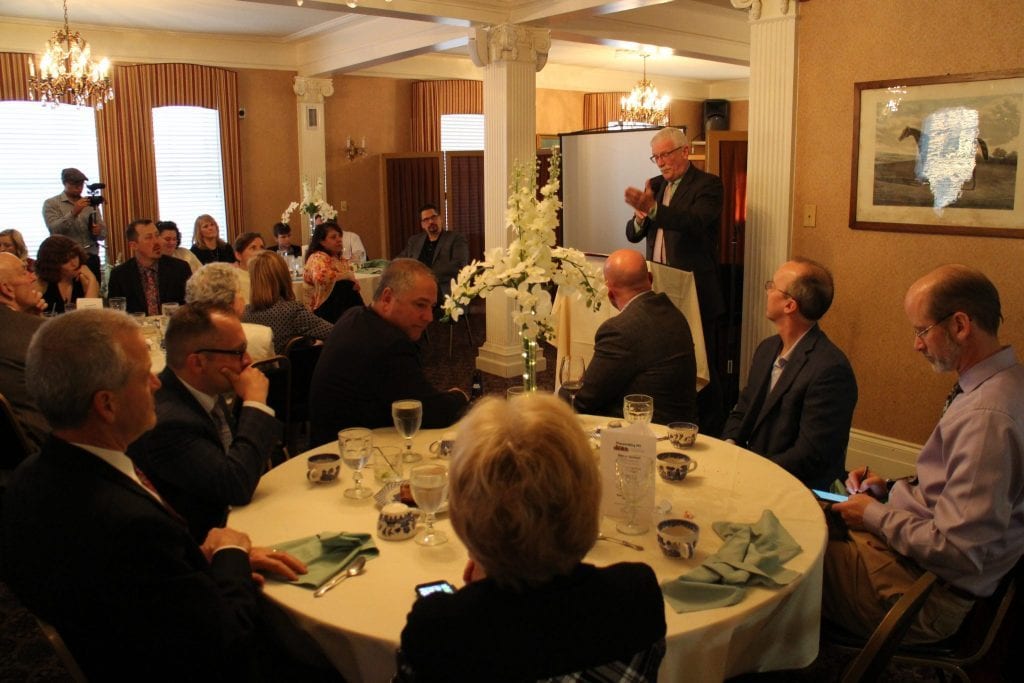 Gloversville Councilman-at-Large Steve Smith also spoke, but before he took the podium Fulton County Center for Regional Growth President Ron Peters said that Gloversville is thankful to have such great leadership.

“We have the best, most professional city and department heads — you are the backbone of the city,” Peters said. 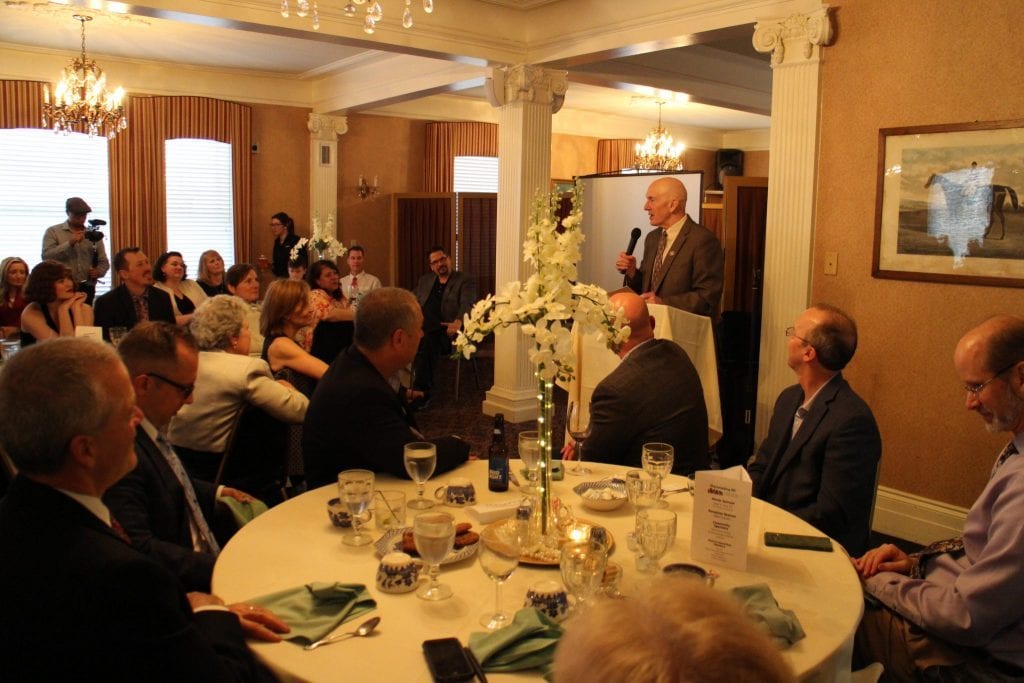 Smith spoke about his experience of moving away from the area in his youth and why he decided to return. He described it as something he “knew it when I saw it, but I didn’t know how to define it.”

“I found my way back to Gloversville,” Smith said. “I grew up here and left when I was 18 and went to college and I came back when I was 38. So, I had 20 years to see the rest of the world. I was going to get one of those great, big Victorian houses, get in on the bottom floor and I was going to spearhead renovation in downtown Gloversville. By complete serendipity the house that I bought and renovated was right next to Vince DeSantis. … We eventually realized all this nonprofit stuff we were doing was OK, but what we really needed to do was get into city government — and here we are. 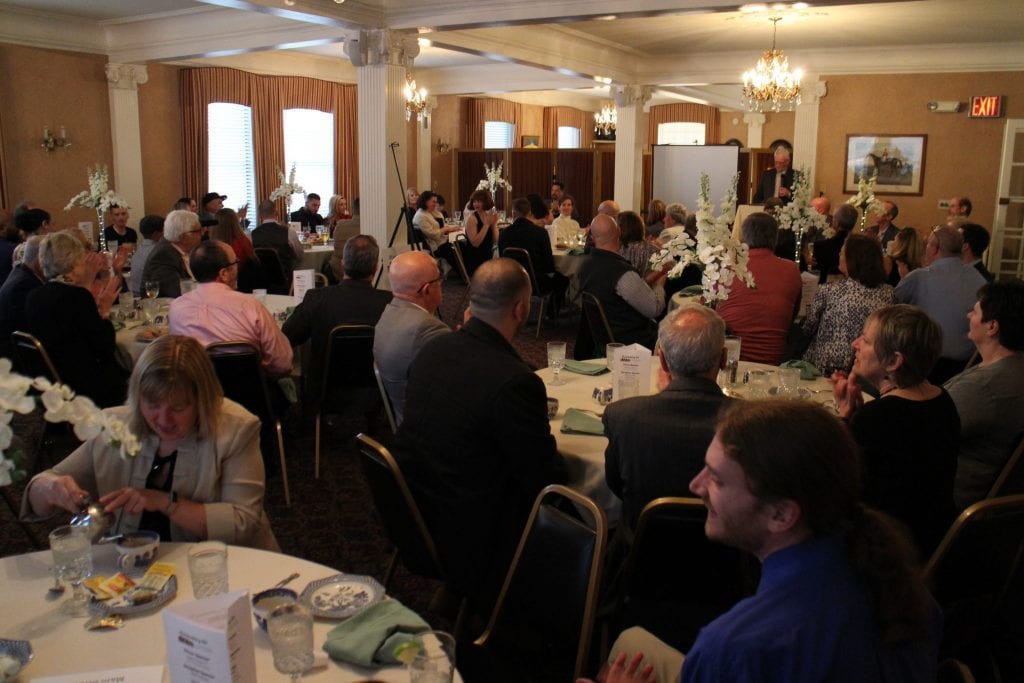 “I still had that feeling in the back of my mind that how do you really make this work?” Smith continued. “… You see it in the trees Vince planted 25 years ago on Main Street. You can feel it in the community and the architectural importance of the whole thing. But, how do you define it, how do you make it happen? Then we hired Jennifer Jennings, and she said it was placemaking. … I love placemaking and it answered those questions about what to do about solving an urban problem.”