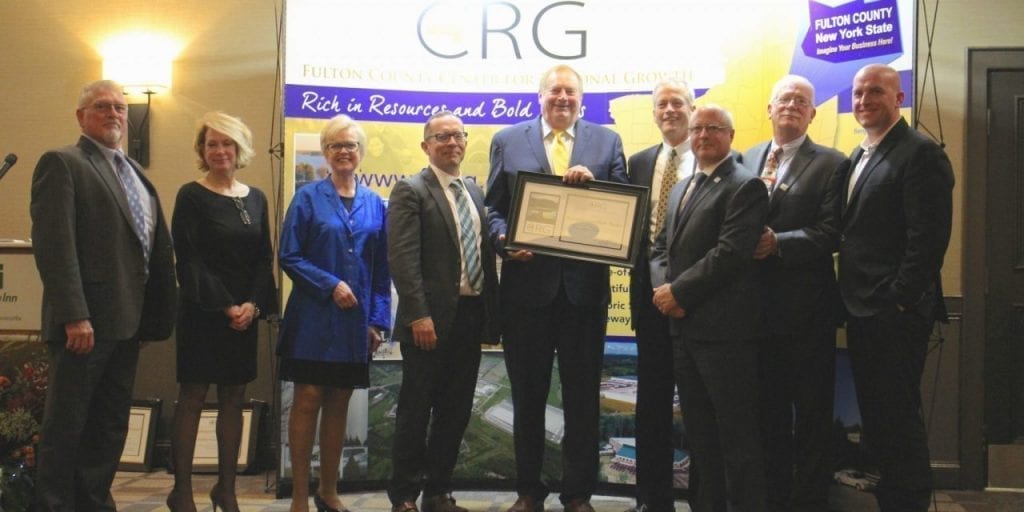 JOHNSTOWN — Five area businesses were highlighted Friday in a “celebration of Fulton County’s ingenuity, success and commitment to the local economy.”

The Fulton County Center for Regional Growth held its second annual Fall Gala on Nov. 16 at the Holiday Inn Johnstown.

FCCRG President Ron Peters opened by noting that the FCCRG serves as a “key resource” by bringing together and creating initiatives to facilitate economic development for businesses and industry within the county.
“Last year I said that we brought businesses together, owners, local leaders, and national experts to showcase the county in a way unseen before,” Peters said. “In 2018, we continued to do that and it’s paying off. We worked with the county to look beyond our own backyard to compete both globally and create new alliances.

“On a local level we deepened our focus on downtowns, creating employment ships and opening dialog with key stakeholders,” Peters continued. “The work CRG does in partnership with regional leaders makes Fulton County an exciting place with a very great, bright future.”

Peters justified the projection by highlighting the accomplishments of the FCCRG and the business community over the past few years. He noted that the county’s industrial parks are nearly full capacity and that there is a need for more “shovel ready sites” that it will work to identify moving forward. He also pointed to more than a dozen small businesses and dozens of jobs created by the Microenterprise Grant Program.

Assemblyman Marc Butler attended the event and was invited to speak following Peters’ introduction. Butler referred to Gov. Andrew Cuomo, noting he was about to say something people wouldn’t normally expect.

“I think this Governor has done something good,” Butler said. “With his regional economic development plans, he’s forced counties to work together as regions and to do an assessment of themselves. Here in Fulton County … we are working cooperatively. Five years ago, every county in the region was going in a different direction, but we are coming together and nowhere is it more apparent than Fulton County. I congratulate you on all the work you’ve done: Getting together, looking at your strengths, examining your weaknesses, and finding a way forward.”

During the event, Peters and board members presented awards to five local businesses.

“We want to recognize the hard working, dedicated, and successful local businesses in Fulton County,” Peters said. “These important companies lay a solid foundation for our great future.” 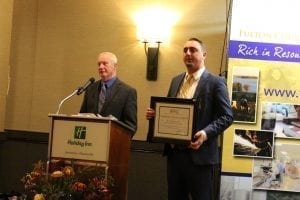 The Large Established Business Award was presented to SLA Transport, Inc./Universal Warehousing, Inc. FCCRG Board Chairman spoke about why the business was chosen, noting that the second generation family business employs 120 in a 1.2 million square foot facility in the Mayfield Commerce Park.

“It’s a great honor to receive this award,” General Manager of Universal Warehousing Andrew Olbrych said. “The big thank you goes out to my employees, without those hard working individuals, this award would not be possible.”

The Small to Medium Established Business Award — for an employer of less than 50 — was presented to Broadalbin Manufacturing Corp. Owner Mike Deuel accepted the award, but FCCRG Board Member Greg Fagan spoke on the business’ behalf.

“This year, the CRG has continued our program of introducing local lawmakers, community members, and business leaders to area businesses on a monthly tour,” Fagan said. “Broadalbin Manufacturing Corp. was a recent stop on that endeavor. It has been in business for 47 years and in that time has become an important fixture in our community. Their highly skilled employees fix and fabricate pretty much anything a customer can ask for. They like to say: ‘If you can imagine it, then we can create it, and if you break it, they can fix it.’”

The Expanded Business Award was presented to the Family Counseling Center, which is located in downtown Gloversville. Peck introduced the business by pointing out that it was the first tenant in the Glove City Commons and is looking to expand. He noted that there is a high need for behavioral health services in Fulton County and the Family Counseling Center is a principal supplier of children and adults as well as a strategic ally of Nathan Littauer Hospital. He described the business as a “success story.”

“We are so excited — we actually had no idea we were winning this award,” Clark said. “It is an amazing agency to work at. We try to think outside of the box to meet the needs of the community. We serve over 1600 folks in Fulton and Montgomery counties. We continue to average about 40 intakes a week of people wanting services. It truly is a family that really cares about this community.”

The Start-up Business Award was presented to the Caroga Arts Collective. Peters introduced the business, noting that it “exemplifies the energy in Caroga Lake.” He pointed out the each year Fulton County welcomes talented musicians from across to the country for the six-week Caroga Lake Music Festival. It has also expanded to offer a film festival and master class for area music students among other things. Founder Kyle Price accepted the award.
“Our nonprofit is really blessed to have such supportive people — openminded individuals that welcome our hundreds of artists,” Price said. “This becomes their summer home, and we hope to create that engagement more throughout the year.”

The Hidden Gem Award was presented to the Northville 5-10-25 Cent Store. Owner Brian Correll was unable to attend, but FCCRG Board Secretary Leslie Ford spoke on the business’ behalf. The award, she noted, is to recognize a business that offers something “unique and wonderful.”

“It’s both an economic award and a personality award,” Ford said. “It has been around since 1907 and there’s a historic sign outside that says that … It’s actually the oldest five and dime store in the United States. … They not only preserved that building, but in they purchased the building next door to preserve, enlarge, and expand. Everyone here could walk into that store and find something different that we love — it’s that diverse and fun to go to.”
The evening also included a performance by Romano Acro Dance Academy. Owner Jessica Romano featured four of the studio’s dancers.
Live music was provided by UpSwing Duo.

All proceeds from the event help to provide programming and support to area businesses throughout the year.

For more information on the CRG, visit www.fccrg.org.