September 26, 2018 by fccrgwpadmin in Business 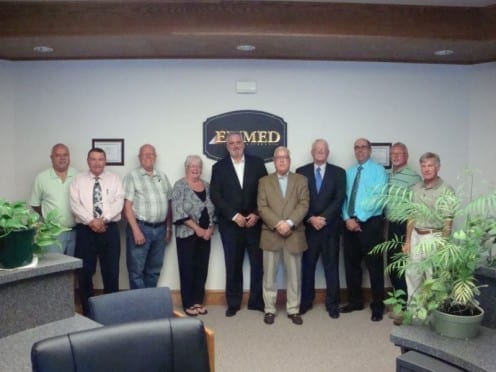 CRG Directors and Fulton County Elected Officials met at Epimed, a medical equipment manufacturer, located at 141 Sal Landrio Drive in the Crossroads Business Park on a sunny and warm September 13, 2017. Bruce Whitcavitch, Vice President of Manufacturing Operations and his assistant, Lynne Bullard met with the attendees in Epimed’s conference room.

Mr. Whitcavitch provided an overview of Epimed’s origins, which go all the way back to the 1970’s when inventor Dr. Bill Kline and Dr. Gabor B. Racz collaborated on the manufacture of the first ideal epidural catheter. Dr. Kline had several patented inventions of his own; from a spring helix to plastic parts for the artificial heart. Dr. Racz was head of the Department of Anesthesia at Syracuse University.

Several years after Dr. Kline passed away in the early 1990’s, Mr. Whitcavitch came on board with the company in June of 1992. This company eventually teamed up with with Epimed, a Lubbock, Texas based sales organization, in the early 1990’s and took on the Epimed name. They occupied two buildings in Gloversville; one on Division Street and one on Fulton Street. 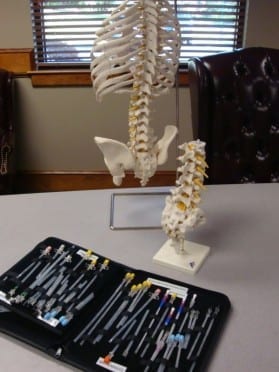 In 2001, the Fulton County, New York Epimed location consolidated into a new, custom designed building on Sal Landrio Drive as the first tenants in the Crossroads Business Park. Here they continue to research and develop a variety of medical products, mostly for pain management. These items are used to deliver medication directly to the source of the pain, like a disc or a nerve, to reduce swelling and pressure. This relieves the patient from chronic pain and gives them the ability to work long term with a physical therapist if needed. They also distribute a variety of protective gear for doctors and technicians that work in the presence of radiation regularly.

Epimed produces products under their label and will contract with other medical companies to produce products under their label as well. The Fulton County office is the manufacturing hub for Epimed and has a staff of around 85 employees. Manufactured items are bulk shipped to the Texas where 25 additional employees package and ship orders. Epimed also has direct sales reps nationwide taking orders for the products that they produce. This team also works with luminary physicians (heads of their specialties who train other physicians) to educate them through cadaver training programs.

The tour group was shown through the building. The tour included the clean room, quality assurance testing, and research and development.

During the tour, we met a maintenance employee working on a piece of equipment, making sure that it was calibrated correctly.

We watched quality control examine tiny items under microscopes with images that were projected onto monitors for easy viewing. 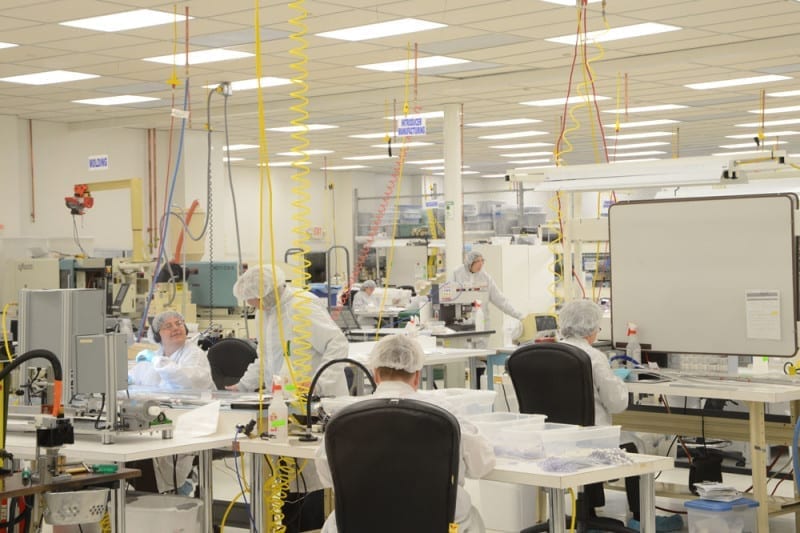 We also saw the tiniest coil of wire I have ever seen being made and expanded automatically. As small as this coil was, we were told that it is not the smallest that they have made. We were shown a one inch piece of that order and it was impossibly tiny. Still, I suppose it has to be if that wire is meant for a vein somewhere in a human body. Amazing.

Mr. Whitcavitch explained that some of the devices that they create are used in radio frequency therapies, cryoanesthesia and site specific injections. In case you are wondering, I have no idea what Mr. Talarico is holding, but Epimed makes it.   🙂

Overall, our tour of Epimed was fascinating. What a great company to have in our little county. These jobs are part of life saving procedures. They help improve the quality of life for people around the world. And they shed light on another opportunity for high quality, head of household jobs that are located right within our community. We all appreciated the opportunity that we had to see them at work.