The close-knit community in Fulton County has proved to be a great place to have a small business. The connections between family and friends create a supportive atmosphere that allows enterprises to thrive. 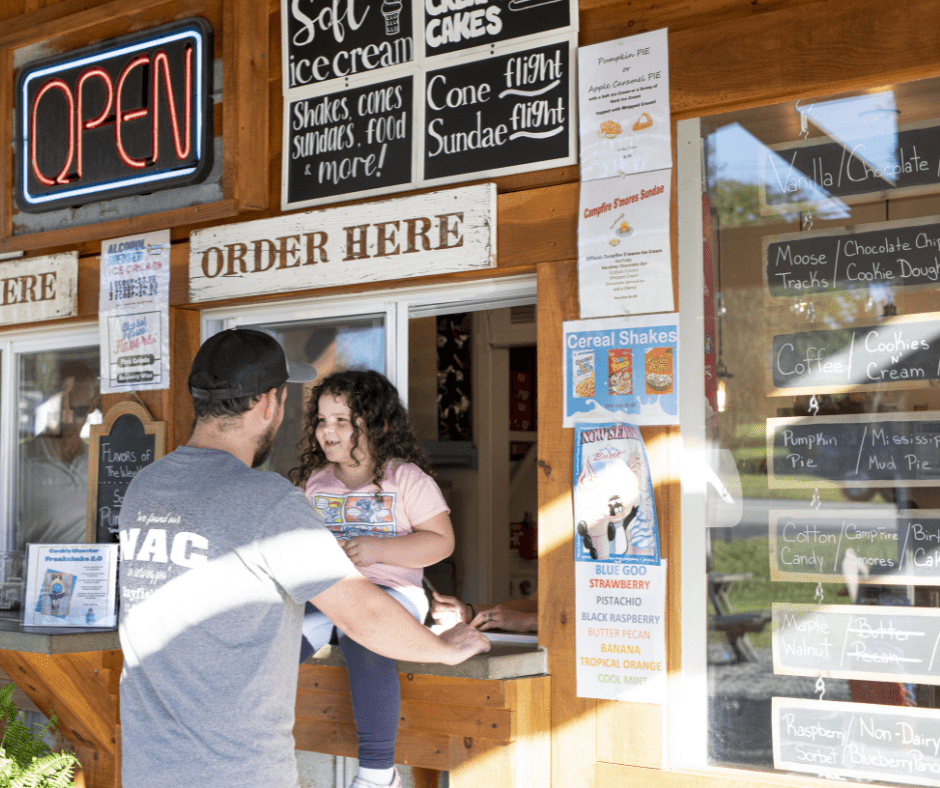 Three Mayfield businesses are a case in point.

When Carly Lansburg moved back to the area where she grew up after living in Wyoming, she wanted to open an ice cream shop, as she had worked in the ice cream industry growing up.

She engaged the service of a local real estate agent, who directed her to the area around the Great Sacandaga Lake. “We had snowshoed where our building is,” Lansburg said. “We looked at it a couple of times and decided this was a great area with the lake just a mile away.”

Lansburg worked with economic development specialist Ken Adamczyk of the Fulton County Center for Regional Growth and is applying for a microenterprise grant to expand the inside of her ice cream shop and her product line.

She finds the business climate encouraging.

“People are definitely always trying to lend out a helping hand,”

Lansburg said. “I found it to be like a snowball effect. You talk to one person, they refer you to another and another, and you eventually find your way.”

Lamsburg uses small local businesses in order to support them. For example, she purchases t-shirts for Zippy’s from the nearby Creative Tees & More in Mayfield, and she uses Derby Office Equipment in Gloversville for advertising materials. 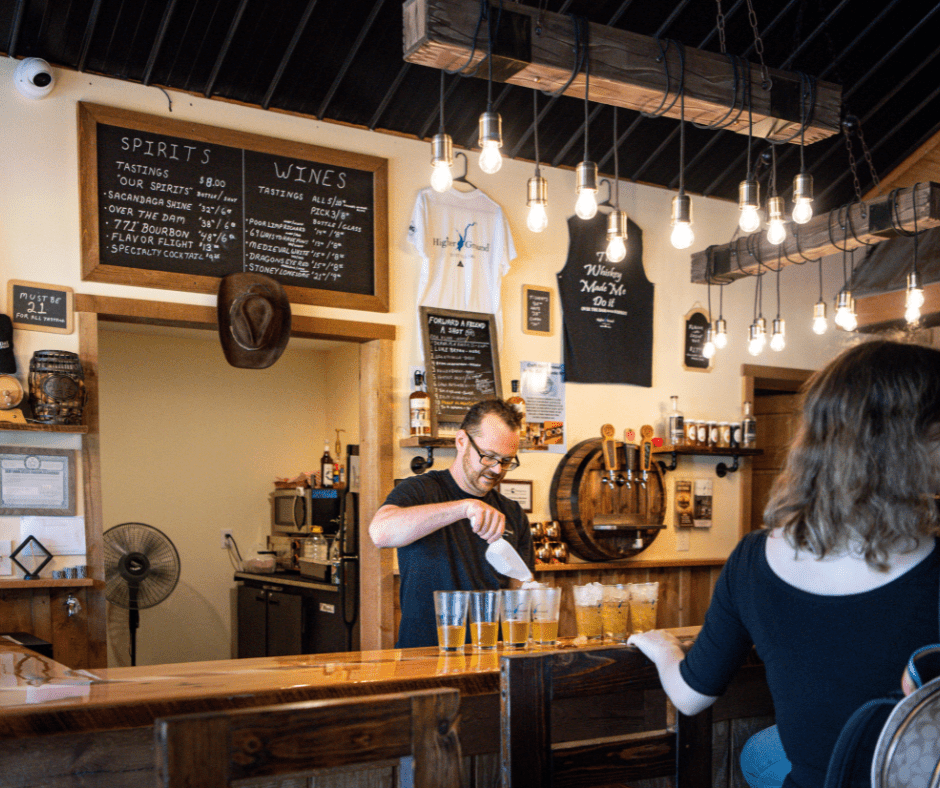 ALL IN THE FAMILY

When Lansburg’s father, Dave Webber, learned that he was eligible for a microenterprise grant, he took his life savings and opened Higher Ground Distilling Company in an outbuilding that he rents from his daughter and her husband, Jed Lansburg.

The building had formerly been a snowshoe  making facility. Webber worked with Mayfield’s building department. “They were fantastic—very accommodating,” he said. He renovated the property to suit his own needs. As an Air Force veteran and former owner of his own construction company, the work came easily.

Webber relocated from Guilderland in order to open the business in November 2020.

“We wanted to provide something the community didn’t have,” Webber said.

Local residents responded. “We were doing the business of a three-year-old distillery in the first eight months,” Webber said. “The community just accepted us so well. We definitely exceeded our expectations.”

In those first fall and winter months, Webber built up a local following. It allowed him to get to meet the area’s residents before the onset of the summer tourism season.

In 2021, Webber worked with the Fulton Montgomery Regional Chamber of Commerce to develop a craft beverage trail that invites people to sample craft beer, cider, and spirits from four establishments in the county.

In Higher Ground’s taproom, he features not only the products he makes himself, but other beer, wine, cider, and nonalcoholic beverages from around the state. 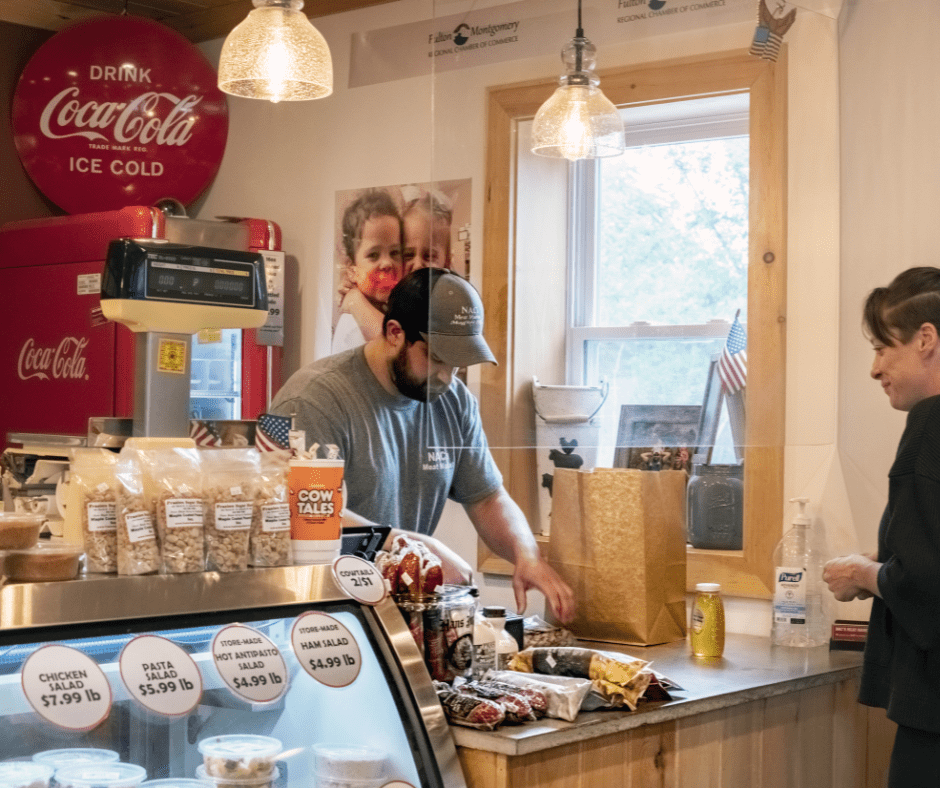 Conte and Guntert had been friends with Jed Lansburg since kindergarten. “We were born and raised in Fulton County,” Conte said.

When they found out there was a space for another business in the back of the ice cream shop, they decided to open NACs Meat Market in August 2019.

Conte’s previous employer, whose family had been in the grocery business for over a century in neighboring Herkimer County, mentored the new business. The pair used their own funds to start the business, fully renovating the space with the help of Frasier Builders in Gloversville.

Both had full-time jobs when they started the business, but as they were able to grow it, utilizing billboards, Facebook, and Fulton County-based radio station WENT for marketing, they were able to leave their other jobs to be at NACs .

They would like  to hire more employees and have reached out to the State University of New York at Cobleskill to see if they can find an intern who is interested in the meat industry.

Guntert likes that the combination of two businesses in one building makes it easy for customers. “It’s a one-stop thing,” he said. “We like that people can stop here and get their dinner and their ice cream all at the same time.”

Webber sums up what has made the trio of businesses so successful—the small-town atmosphere of Fulton County.

“I love the people, the way of life, the sense of community that you don’t get in a lot of the suburban areas,” he said. “The rural area tends to have much more of a family feel to it.”