From Hemlock to a Golden Age

February 14, 2015 by fccrgwpadmin in Gloversville

Gloversville was originally settled by New England Puritans in the 1790’s. In the ensuing decades as the community grew, leather tanning became a prominent local industry due to the purity and abundance of water and the availability of hemlock bark as a source of tannin. As a result, the manufacture of gloves became widespread as a cottage industry. It was in 1828 that the settlement was officially given its current name upon the establishment of the first post office.

Steady growth followed not only through manufacturing but by reason of Gloversville’s prominence as a gateway to the Adirondacks with its rich supplies of lumber, firs and other forest products. Even today, Gloversville has greater and immediate access to the Adirondack wilderness than any other city.

After the Civil War, the glove industry boomed, causing large numbers of immigrants from many of Europe’s glove making centers to make their new homes here.

Between the years 1880 and 1950, Gloversville enjoyed a sustained and stable golden age, during which most American leather and nearly all American gloves were manufactured here. The population grew to 25,000 and in 1890 Gloversville became a city. Millions of pairs of gloves were regularly shipped by rail to all parts of the world. This created fabulous wealth for dozens of prominent families, many of whose names are echoed in the titles of several philanthropic foundations today. 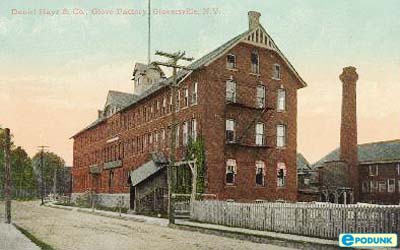 What is particularly remarkable is that even during its height, the manufacture of gloves never became one of mass production. The creation of each pair of leather gloves was the work of an individual craftsman. “The Glove Cutter” was personally responsible for the quality of his product. A middle management level was never developed in the glove industry. Each owner of any one of dozens of glove companies, both large and small, had a personal relationship with his “cutters” and sewers or “makers”. Quality was a matter of personal pride.

Today Gloversville’s physical character is reflective of much of its history and traditions. The Europeans who came here from Germany, Poland, Italy and Scandinavia were not unskilled laborers but “burgers” or city dwellers with somewhat higher sensibilities. They brought with them their love of art, music and culture, including the fine arts, which were becoming popular among the middle classes in Victorian Europe.

Memorial Hall, also called the Kasson Opera House was built in 1881 and still stands on North Main Street next to the Glove Theatre. It was one of the first great performance halls in the entire North Country region.

The City is built on the European plan consisting of a central commercial downtown or marketplace on a relatively narrow main street, with residential neighborhoods extending immediately from it in all directions. Former, as well as existing glove factories, large and small, are scattered throughout the city. These former factories afford an abundance of well-lit, solidly built work spaces for a variety of artistic uses, such as artists’ residences, studios and rehearsal space. One former glove factory just off Main Street is now the home and studio of a sculptor and boasts a gallery with a regular calendar of shows by regional artists.

Gloversville’s slow and steady industrial decline from 1950 to 1990 was unmitigated by any of the fast economic booms that have been experienced in some other places in the northeast. As a result, however, one finds the city and its surroundings largely unspoiled.

Gloversville’s downtown is an architectural gem lined with three and four story Victorian structures having escaped the urban renewal blight of the 1960’s. With short walking distance from downtown are the city’s oldest neighborhoods full of solidly built vintage residences suitable for restoration.

Additionally, you will find the city surrounded by a truly rural environment dominated by fields and forests with almost no strip mall or residential sprawl development.

The pristine beauty of the Adirondack wilderness with its lakes and forests can be as short as a ten minute drive from the City’s Center. Not a single traffic light interrupts the traveler between the city line and the vastness of the wilderness on any one of several two-lane roadways.