with a family flair
August 3, 2022 by fccrgwpadmin in Business

Gaetano Lanzi graduated from Providence College with a marketing degree and a job offer from a New York City firm. Instead of moving to the Big Apple, he chose to return to Fulton County to work in his family’s restaurant business, carrying on the family tradition of offering authentic Italian cuisine, while at the same time, expanding and moving the business forward with innovation and creativity. 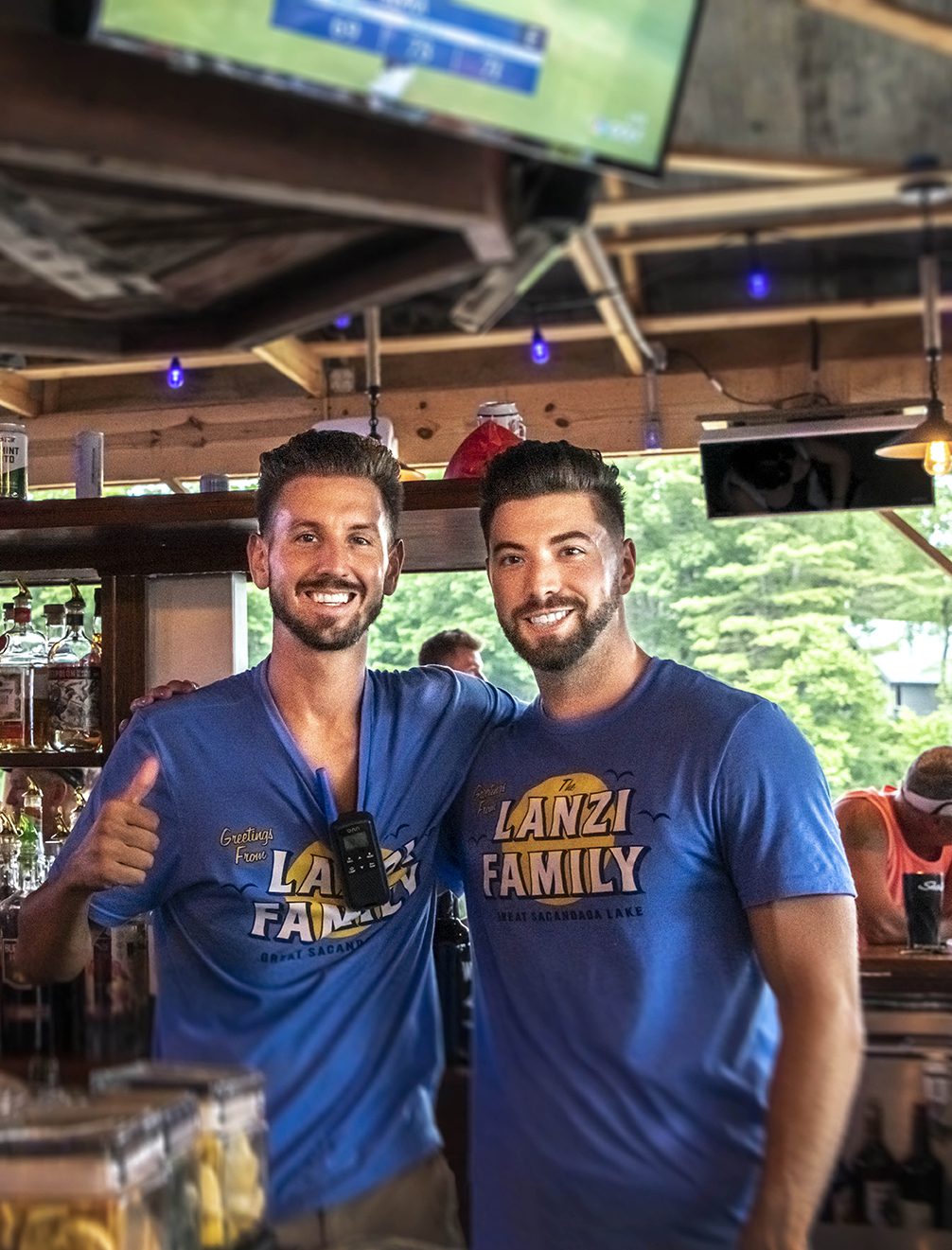 Gaetano, his siblings, and his cousins are the fourth generation of the Lanzi family to work in the restaurant business. From talking to Gaetano, they wouldn’t have it any other way. “I wouldn’t want to be working with anybody else but my family,” he said. “That’s what makes us stronger than most,” he said, noting that a fourth-generation restaurant business is a rarity. “Most people either sell out or fail, but we keep expanding as our family grows.”

Members of the Lanzi family work together in various aspects of the business. Gaetano’s older brother Giuseppe works in management, doing payroll and staffing. A cousin, Antonio, runs the front part of the house at Lorenzo’s Southside and manages other aspects of the restaurant with his uncle Luigi. Gaetano’s younger brother, Giacomo, is chef and kitchen manager at Lorenzo’s. His uncles Chris and Larry run Lanzi’s on the Lake, and his cousin Chris runs Partners Pub with Uncle Luigi.  Giuseppe also operates Sport Island Pub with his uncle Anthony. Joe manages Lakeside Tavern with his son Gaetano.

The family’s first restauranteur was Luigi Lanzi, who opened his establishment in 1920. Luigi had emigrated to the United States from a town near Rome. He worked on the railroad and in the carpet mills before striking out on his own, first buying a small store and eventually operating a Prohibition-era speakeasy and banquet house in Amsterdam. 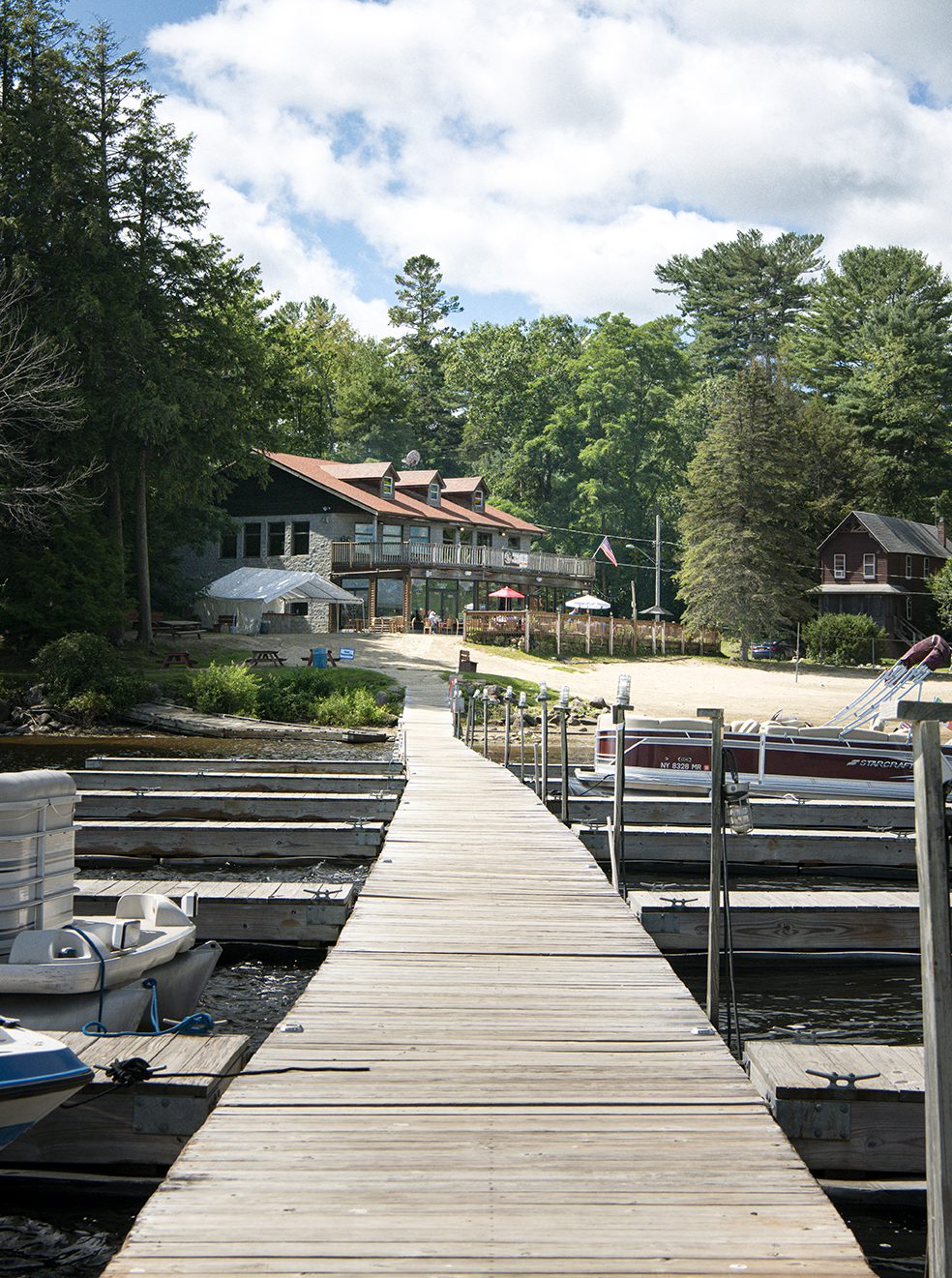 Just four years later, the family built the Sport Island Pub in Northville, followed by Partner’s Pub & Grill in Johnstown in 2009. Yet another expansion followed when the family opened Lanzi’s Lakeside Tavern & Marina in Gloversville in 2013, followed by Lorenzo’s Southside in 2020, just two weeks after the COVID-19 lockdown began. The family’s latest expansion pays homage to Gaetano’s grandfather, who operated a restaurant just one block away from where Lorenzo’s Southside stands today.

The two newest restaurants are compelling illustrations of how the Lanzis seamlessly combine the old with the new, building on what has made the family successful thus far while innovating for the present and the future. 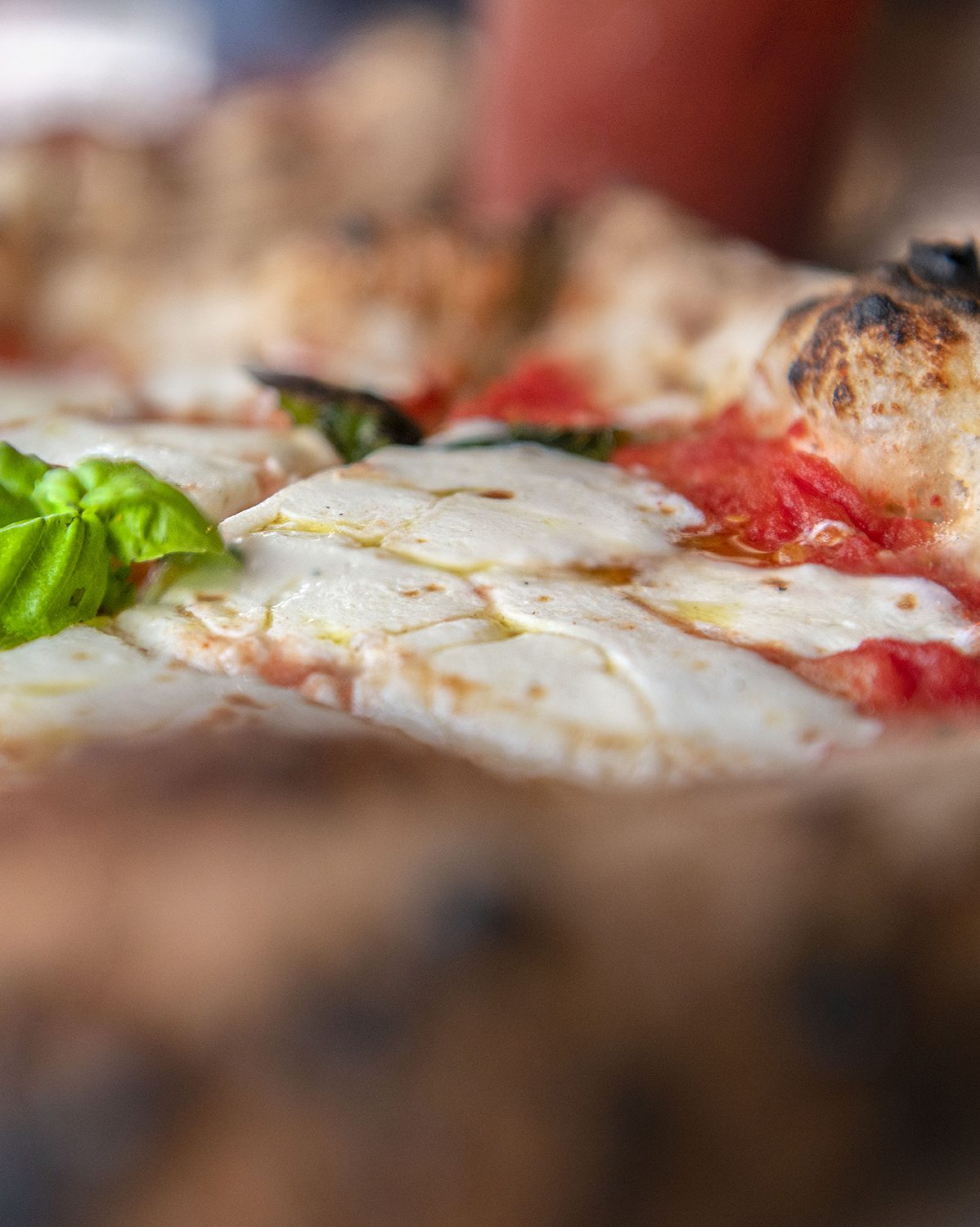 Gaetano has his eye on what will make his family’s business stand out. For example, Lorenzo’s Southside specializes in Neapolitan pizza and homemade pasta. Members of the Lanzi family traveled to Italy to do research before they opened the restaurant.

Then Gaetano and two brothers, Giuseppe and Giacomo, studied the 300-year-old tradition of Neapolitan pizza-making, training with Roberto Caporuscio, president of the Associazione Pizzaiuoli Napoletani in New York City, and the Italian World Pizza Champion from Naples, Michele D’Amelio, leading to Lorenzo’s Southside’s certification as a Neapolitan Pizzeria. Some customers have even commented that the pizza they serve at Lorenzo’s is on par with New York City restaurants.

“We wanted to go back to our roots and bring back our old world with a new spin influenced by our generation,”

said Gaetano, who oversees the Neapolitan pizza part of the restaurant. 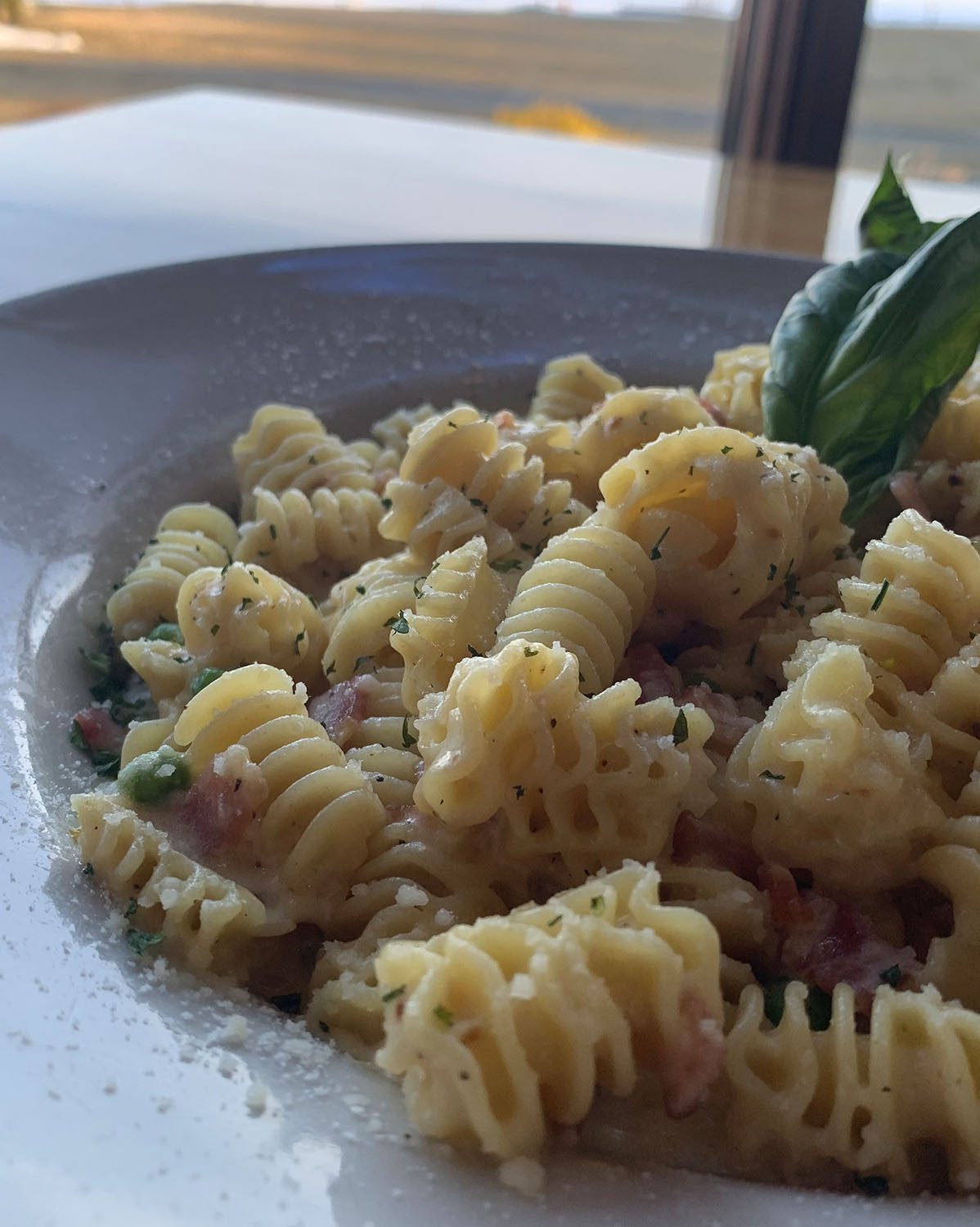 They have made the cooking as authentic as possible, using an imported Valoriani wood-burning Italian oven that cooks the pizzas at 900 degrees F for 60 to 90 seconds, giving the pizza a crisp, soft, raised crust that distinguishes the Neapolitan pizza from any other. The family imports from Italy many of the ingredients, including preservative-free Italian flour for the crust, mozzarella di Bufala, other Italian cheeses, San Marzano tomatoes, and extra virgin olive oil.

The pasta is always freshly made

by Giacomo, who was trained by his father at what Gaetano kiddingly refers to as “Lanzi University.” Joe Lanzi remains the head chef for all the establishments. “He’s the one who taught my brother everything he knows, and he still cooks at Lorenzo’s,” Gaetano said.

A special machine produces egg-based pastas like angel hair, gnocchi, fettuccine, linguini, and cavatelli at 60 to 70 pounds per hour.

Customers can also order from a beverage menu that features imported Italian as well as local craft beers, including its own IPA, “GSL Juice,” which it brews at Artisanal Brew Works in Saratoga Springs. (GSL stands for Great Sacandaga Lake.) “It’s the number one seller at all of our locations for beer,” Gaetano said, noting that the beer is distributed as far away as Los Angeles. Lanzi’s brews the beer every two weeks, and it sells out, he said. 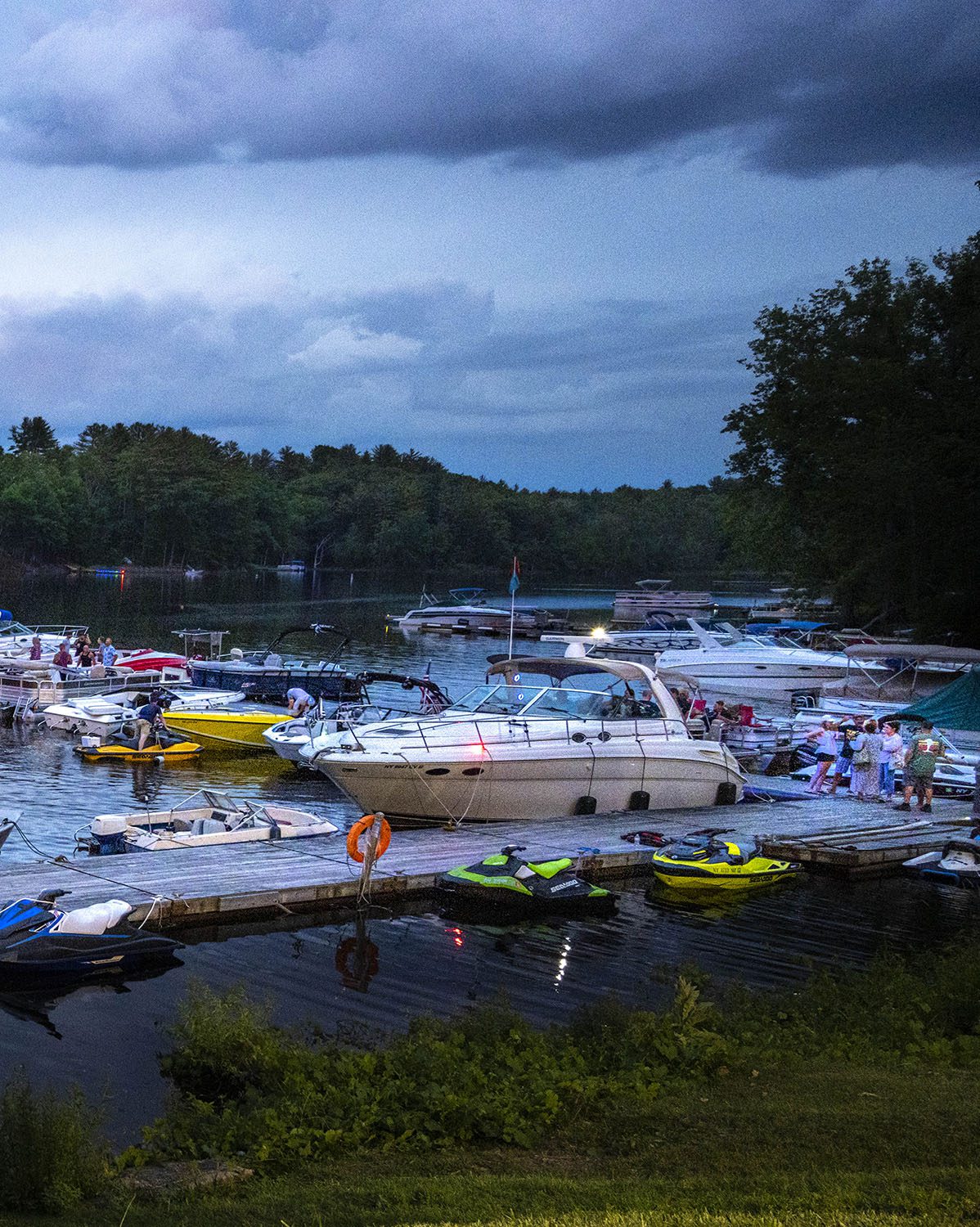 The Lanzi family’s five establishments make the business a major employer for the area, providing jobs for about 180 people. “We treat everyone like family,” said Joe Lanzi.

Gaetano credits his father and uncles for seeing the area’s potential when they originally invested in Fulton County in 1993. “They saw a vision, and they risked everything,” Gaetano said. It has paid off as they continue to experience success in Fulton County and again in Montgomery County.

That, and the strong work ethic ingrained in the Lanzi family, has made the business prosper.

In addition, the new generation demonstrates that a fusion of tradition and innovation make for good business. “Our generation is bringing new ideas to my father and my uncles, and we’re expanding their business,” Gaetano said, pointing out that his father and uncles did the same for their father. “We’re always reinvesting in the business and doing what we can to make it better,” he said. That turns out to be a good deal for locals, improving the quality of life with fun places to hang out and relax with friends and family, and it provides tourists with great vacation dining and entertainment experiences. 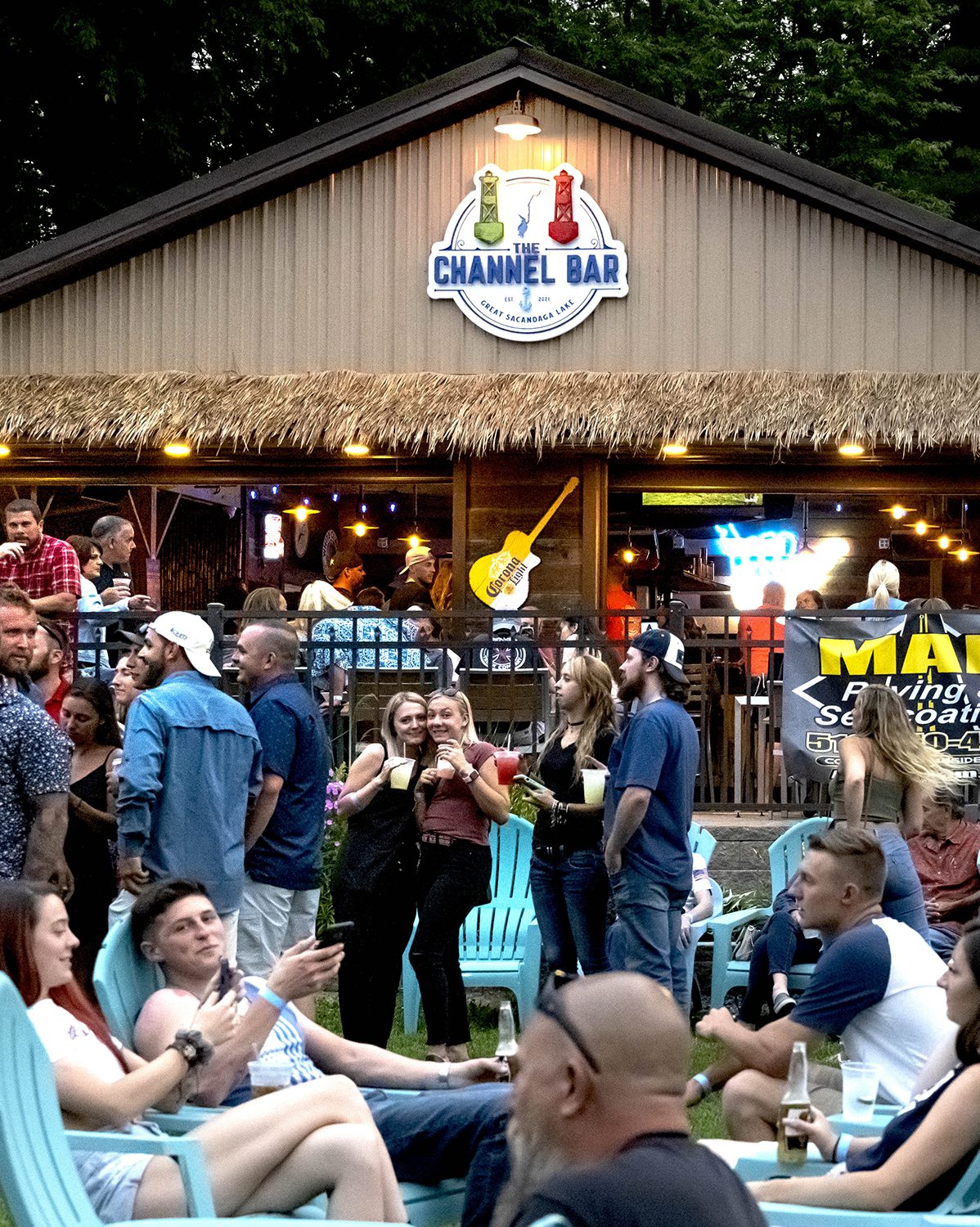 The other example of how the fourth generation brings innovation to the family business is The Channel Bar at Lanzi’s Lakeside Tavern & Marina, which opened in May 2021. Gaetano saw great opportunity there. “The Great Sacandaga Lake is a gem in the rough,” he said. “A lot of people don’t know about it, but it’s getting very popular post-pandemic because we have a lot of people moving to the area that we haven’t seen before, particularly from downstate and from other areas.”

The idea for the Channel Bar came from the family’s annual trip to Aruba.  they were enjoying an outdoor bar and thought, “Why can’t we have this concept at home?” They took into consideration the upstate New York fall and winter weather, and they built the outdoor bar so that it can be enclosed in the colder months, bringing the island feel to the Great Sacandaga Lake in warmer months. In summer, the enclosure is taken down, and customers have their choice of inside seating where there is another bar, or outside seating on the lake.

The Channel Bar has a decidedly tropical feel, with its décor and the breeze blowing in off the water. “We wanted to create a resort feel,” Gaetano said. The televisions around the bar, which works on a hydraulic system so that it can easily be put away at closing time.

“We’re used to outdoor dining, so we know the concept pretty well,” Gaetano said. “It’s right on the lake, and there’s nothing that compares to it in this area.” There’s island music playing on the weekends, and they recently built a bamboo stage on the lawn outside for a steel drum band and other musicians to play. “You feel like you’re on vacation,” he said.

Lanzi’s is definitely one to watch, as more growth is now in the works.  However, the details are not yet ready to be made public. “The next generation is going to expand,” said Joe Lanzi. “They will continue to expand and keep the legacy going.”